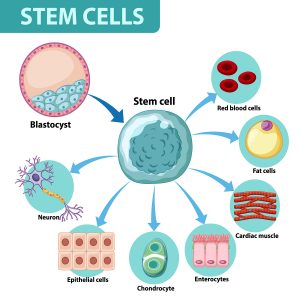 Cell therapy is a stem cell transplant, also known as stem cell. Which can develop into different types of cells Including being able to continuously divide into new stem cells And acts as a complete repair system for tissue It can be used to treat diseases caused by degeneration of cells in the body. We can use stem cells from ourselves to improve the repair efficiency. Strengthening various tissues Of our body Which our own cells are a safe source of stem cells Have good performance And the risk is minimal For stem cell transplantation Stem cells can be used on the knee joint. Stem cells, facial skin and other parts of the body have helped to slow down aging, diabetes, immune dysfunction. Autoimmune diseases such as SLE, rheumatoid arthritis, and pain Damaged skin and hair loss Diseases involving the brain and heart system Wound healing, etc.

Stem cells are natural, multicellular cells that reside in all living organisms, including humans, plants, and animals. Stem cells are made up of multiple cells. Originated from one cell It starts with a single cell that is fertilized between males and females. Evolves into multiple cells and evolves into organs The cells that originate all living things are called “stem cells”.

When the holy man grows By taking half of the cells from the mother’s egg And half is from the father’s sperm Together to become one cell The implantation became human. And there are more organs. Stem cells can develop into more than 200 types of all tissue cells at once, so it can be called. Every cell is developed. It comes from stem cells.

The founder of the term stem cell was a Russian scientist at the 1908 conference in Berlin believed that stem cells were capable of making blood. Therefore named stem cells and has been studied for a long time and continues with the development of knowledge that can increase life

Research has found that Stem cells can repair the body. By conducting experiments to bring the blood vessels of the rats To cause ischemic heart disease And experimented by injecting stem cells into it. And the new heart muscle by itself. There has been more studies and research of stem cells. But in some places it is used without real cognition.

Stem cells from the blood: The blood contains stem cells. At present, we try to bring stem cells from the blood for treatment. By injecting the bone marrow to generate stem cells, then using a stem cell collection machine. And re-injected into a new study, for example, in a diabetic patient who had to amputate a leg. Using stem cell treatments, approximately 90% of them do not have to amputate their legs and can still heal their wounds. Which is a response to treatment that is quite good

Stem cells from the placenta: It comes from the umbilical cord from the amniotic placenta, which can be extracted for therapeutic benefits. The type of stem cells suitable for transplantation in patients for treatment is called “mesenchheim”. This will make it possible to transplant to anyone. Currently, stem cells have been separated from the dead water. For use in the treatment of diseases such as Alzheimer’s disease Parkinson’s, diabetes, and blood disorders

The principle of operation of stem cells, first of all, enters the injured organ and causes changes and regeneration in the tissues of that organ. Prick the rat brain and inject stem cells into the rat’s tail. It appears that stem cells have transformed into brain cells in the rat brain region. Changing that cell It is proven to be a change from the injected cells.Stem cells also act to create Growth Factor to stimulate cells to repair themselves, which is like an elixir.